– During the holidays we went to visit our Vika of Lugansk.

She finally allowed us to write about her current situation.
It was hard for her and for her mom, but also for me and Zhenya.

Vika has tuberculosis.
And three weeks ago she fell into hypoglycemic coma.

Please read the whole story…
When we brought Vika for her eye operation in Moscow in January, they detected spots on her lungs.
The weird thing is that she had several surgeries in Lugansk for which she had lung X-Rays, and those were clean – otherwise they would not have cleared her.
But now Vika had to be immediately transferred to a TB ward, though the diagnosis was still less than 100% certain. After after a month and a half, there was no indication that the microbes are producing new rods… Until we received the confirmation. It came as a shock to all of us. The nearly blind diabetic girl with jumping sugar levels (the doctors were stunned when they saw her medical history) now also had active TB. So she asked me not to write about it. 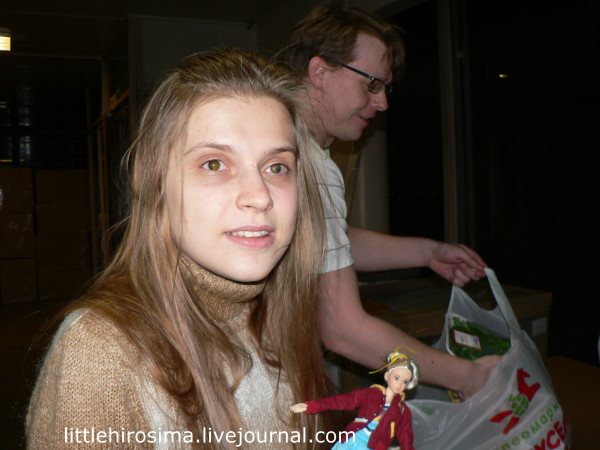 Vika was transferred to a TB ward, which was a miracle. Because we had an agreement with the clinic only to work on her eyes – which meant hospitalization at the ophthalmological ward, under the observation of a whole team of endocrinologists. There was no provision for treating TB under the treatment plan for which we delivered her to Moscow – to undergo free operations thanks to Irina Bednova and Artur Zakirov.

She would have had to go back, which would have been the end for her. I saw the TB ward in Lugansk and the only thing I can say is that they can’t treat people–no money, no medication.
Vika’s mom was admitted to the ward too, which is a whole another miracle. By law, healthy people aren’t allowed into the TB ward, but Vika alone can’t do anything–she’s nearly blind. However, Svetlana can’t be officially admitted into the hospital, which means she is not on the hospital’s meal plan (Vika is, but her mother isn’t). 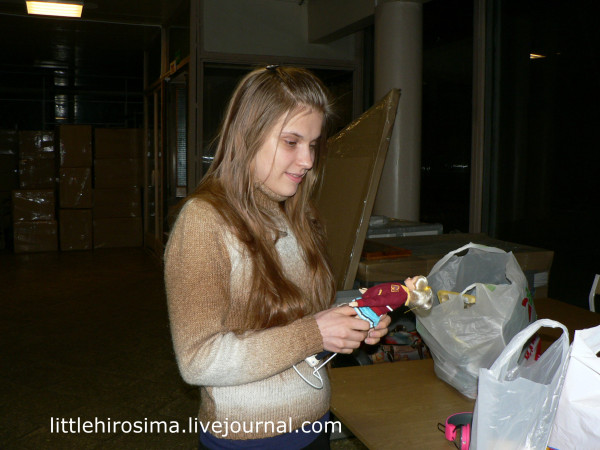 But the worst part of the transfer is that the food in TB ward is not optimized for diabetics.
She can’t eat almost anything from the daily ration.
Svetlana showed me what she is served every day–various kinds of porridge with sugar, potatoes, pastas, rice, bread… These are all carbs, which are a no-go for diabetics. 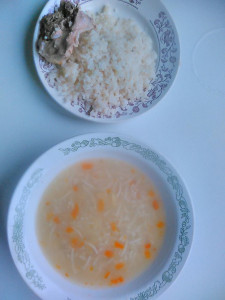 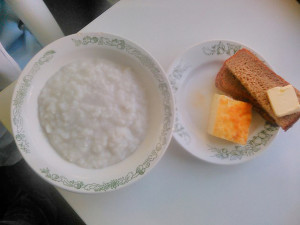 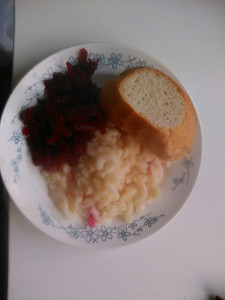 Tanya Anikina, a volunteer and my universal assistant, provided them with a pressure cooker. Patients aren’t allowed to use the kitchen, but in the evenings Vika’s mom can use the cooker to prepare meat, vegetables, oatmeal.
They have no money at all, as you can guess – they are cut off from the world at the hospital. All we could do is make sure they could get their welfare payments in Lugansk. But that’s pennies. And it is disbursed in Lugansk, while Vika and Svetlana are in Moscow.
So Tanya and I have been constantly bringing them food and medicine.
She gets the regular medicine, but not the other stuff.
Since this is a TB clinic, the free treatment plan which Vika had earlier doesn’t apply here.
She gets what she needs for the TB, but not the eyedrops and vitamins for her eyes, or the liver-protecting drugs which are required when one takes huge doses of antibiotics. 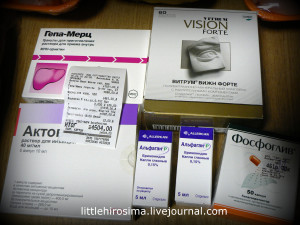 The antibiotics have already once caused Vika to crash, back in March.
And now this.
Two and a half weeks ago, Vika got ill. She caught a serious cold. Partly because she walked outside with us when we visited. She was so glad to see us that she kept repeating she was not cold and that she wanted to keep walking around with us. It was very late and the staff wasn’t letting us walk around the clinic.

Then she got ill. And stopped eating. So her sugar once again began to go up and down, until she fell into hypoglycemic coma. That ended her positive trend, where she was improving and gaining weight. 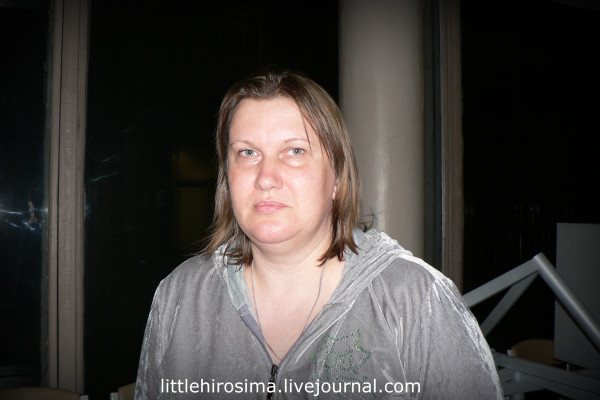 Vika has recovered from her illness and her sugar is stabilized.
But doctors have said that Vika must undergo an operation to remove a part of her lungs.
It could yet turn out it’s not TB but something else (I am not a doctor so I don’t know how that’s possible).
One thing is for sure: no eye operation until her lungs are operated on.

When I started to tell Vika that we need to write about this, she broke down crying.
Turns out that one of her childhood friends had a mother who worked at the TB clinic, and everyone avoided that girl because of that. She was afraid everyone would begin to avoid her if I write about what happened.
She also said that when she was diagnosed with diabetes, some people shunned her even though it is not contagious. People are cruel and they don’t want to be around “others.”
The reality is that people love you while you are healthy and beautiful. As soon as that’s gone, no one needs you. That’s life…
Vika said that after her brother died and she began to lose eyesight, her circle of friends has gotten much smaller, even though she had plenty of friends before.
She and her mom were really worried how relatives would react. As if it was Vika’s fault. She didn’t even know until recently. And her stage of TB isn’t contagious.
Although, to be honest, when I learned of the TB I was pretty freaked out myself.
For those who are worried about me and Zhenya, we did the TB tests and talked about it to the doctors. We’re fine. Nobody even wears facemasks at the clinic. At first we thought of wearing masks, but we soon learned that it would be nearly impossible to catch TB from Vika, and her ward is for people with non-contagious form of TB.
Anyways. Now, several months later, Vika agreed that I write about it all.
Vika, you are awesome, we are so proud of you. Your illness is not your fault.
I feel very sorry for those who don’t understand that.
Keep fighting and don’t look back. This time, Anastasia Troshkina, who already sent money several times, brought Vika a player and these pink headphones from the top photo. Plus a doll and many other little things.

Vika is very lonely at  the clinic. If it weren’t for the illness, we’d have taken her to the conservatory, at Katya Shkeneva’s suggestion, to listen to music. But she can’t leave.We are her lifeline to the outside world.

Girls, thank you all for remembering Vika.
Anya’s flashlight, Lena’s book for the blind, all the little things–they are all unbelievably important to her.
She’s delighted by the headphones.  Svetlana said she slept with them on, today. Thanks to all who pitched in.
But now I have a special request for everyone – Vika and her mom really need help. Their situation is such that they can’t make do without it.
I will post all the receipts and photographs, as usual.
If you are afraid to wire money, you can buy the medicines yourself and pass them on to me (contact information below). 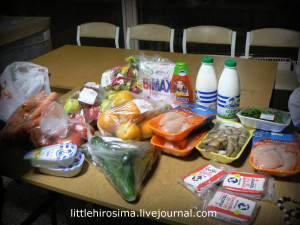 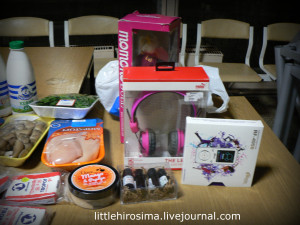 If you want to join in helping Vika or other people of the Donbass, write to me through LiveJournal, facebook, or email, or Paypal to the same address: [email protected]

Ishchenko: Kiev Will Collect Money For “Eurovision”, but in 2017 Ukraine Will Not Exist

Hydroxychloroquine – What is the controversy really…

The Theocratic Madness Behind Ayatollah Ratcliffe’s…

Prev Next 1 of 5,174
Popular Topics
Advertisements

Hydroxychloroquine – What is the controversy…

The Theocratic Madness Behind Ayatollah…