The Tears of Lugansk

The Tears of Lugansk [Originally posted on December 22, 2014]

Translated from Russian by J.Hawk[To read Yevdokia Sheremetyeva’s other dispatches from the Donbass, click on the “littlehiroshima” tab above the title.]

We have done the almost impossible. In less than a week we have collected a van’s worth of food and stuff. And on that weekend Sasha and I took it to Lugansk from where my friend Zhenya took everything to Pervomaysk. Offers of help are still coming in, which means there will be at least one more van. So I’ll probably go the next weekend too. I’ll write about the humanitarian aid separately, I will definitely write about it. Guys, friends, brothers, sisters, my kin, thank you to everyone who sent money, who brought warm overalls for children and baby formula. Thank you to all who don’t know me but trusted me nevertheless. I will write about the food distribution and account for everything.

But right now I want to talk about something else. My world has turned upside down. And it will never return to what it once was.
One can read stories about other people millions of time. One can watch and watch youtube videos. But, believe me, it’s not the same. I knew about everything. But when you see it with your own eyes, reality itself changes.
The world has changed and it will never again be the same for me.
Concerning Lugansk, I should start with the customs and how we and our diaper and canned meat-filled van tried to cross the border through the crowds of OSCE observers and border guards. 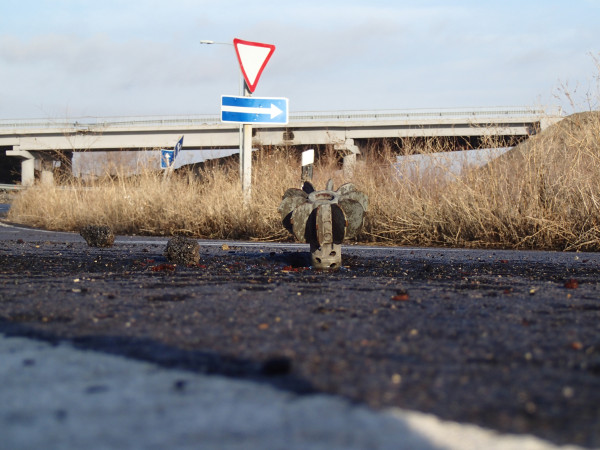 How they didn’t want to let us through and tried to send us back. But I won’t talk about that. It’s not necessary. Because there are also good people, not only the scum.
My Lugansk begins at night. When we are being met already on the other side. When I am hugged by Zhenya and Lena. They have an escort in body armor and a Kalashnikov. It’s the commandant from Pervomaysk, a handsome young kid with sharp facial features.
We arrived at night, and the curfew begins at 11pm. Can’t go without escort. My perceptions of the war started on that night. A huge, empty road that was built for the European Soccer Cup.
Now it’s like Chernobyl.
Sadness and shivering skin. 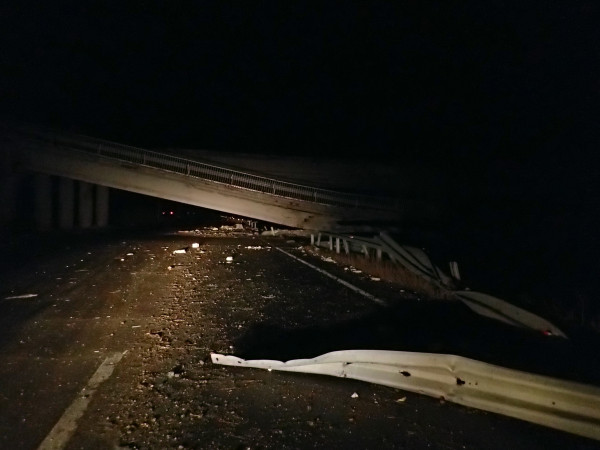 Perfect asphalt, deep craters, destroyed bridges and tanks on the road.
Pitch black night, you drive slowly because you are constantly encountering huge shell craters and shell fragments here and there. And then there simply sits a tank…
–Yes, it’s always a slalom here.
Zhenya laughs. And there’s nobody around. Emptiness and blackness which are mercilessly beginning to swallow me.
Later, in daylight, when you see other vehicles on these roads, it’s not as terrifying. Not even a collapsed bridge or a burned out tank cause that kind of panic. Although you realize that only recently people burned there to death.
That night brought me into a state of adrenaline shock.

Apocalypse as it really exists. 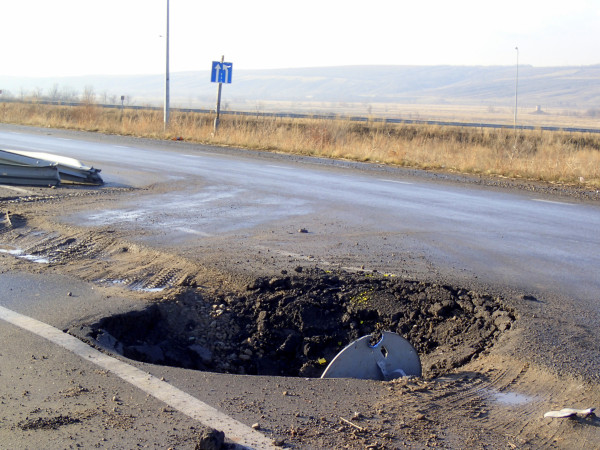 In the morning we drove to Novosvetlovka or, rather, what’s left of it.
While I was taking photographs a woman walked by. Irina, a tall blonde, sent all of her children and grandchildren to Russia.
–Why don’t you leave too?
–Where? Who needs me? This is my home.
–Were you here during the bombardment?
–Yes, I was. 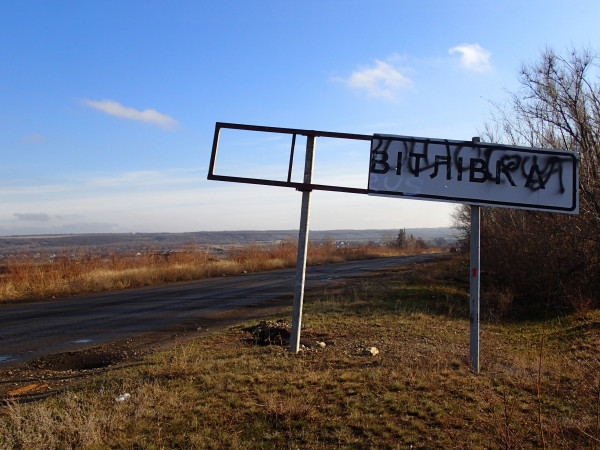 An older guy in a quilted jacket stands nearby. Probably a neighbor.
–The Aidar battalion locked up everyone in church, then went around homes and apartments, stealing. It was awful. We spent an entire day there. They would fire bursts at the church.
–How many died?
–Hard to tell.
Irina, tears in her eyes, turns away. She wipes them away.
We heard about Aidar and the church from three more people.
–Do you work?
–Yes, as a nurse.
–Do you get paid?
–Not since September. No big deal, this is home.
The church 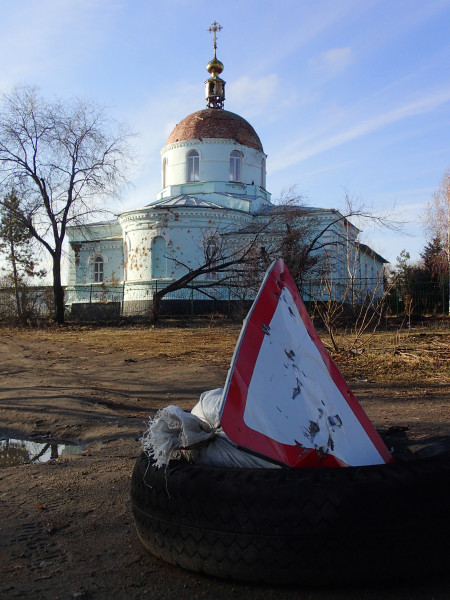 I stand, I turn away, but the damn tears won’t stop coming.
I get in the van. Zhenya is calming down Lena.
–Lenochka, it’s fine, it’s fine, don’t cry.
It’s hard. It’s hard not to cry.
Zhenya clenches his jaws.
And I turn away once again. 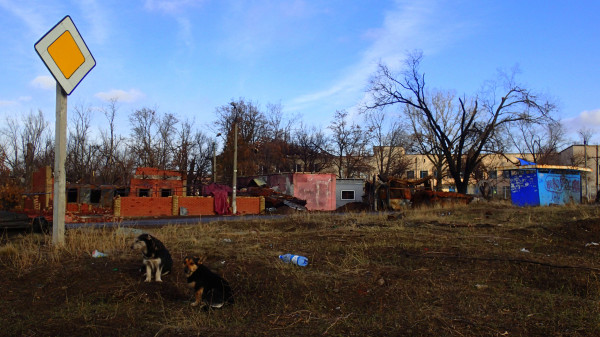 –Need a ride, pops?
There is an older man on the road in huge boots, waiting for the bus.
–Is this a Christmas event?
He gets in and talks without stopping.
–I’m coming from a funeral. My niece.
–Why don’t you leave?
–Why should I leave? This is home.
–But still, why take the risk?
–Can’t avoid one’s fate..
And he looks at me, puzzled.
–What about children, wife?
–They are in Kiev.
He sighs and continues:
–I tell my friends, my kin, what’s going on here and they don’t believe me. They say I’m lying. My own kin doesn’t believe me! Nobody in the whole world believes us. Can you understand? Nobody! They are hitting us with grads and mortars, they kill, loot, and nobody believes us. Nobody! We are killing and shelling ourselves!
His voice falters and trails off. I see out of the corner of my eye–his tears.
I turn away. 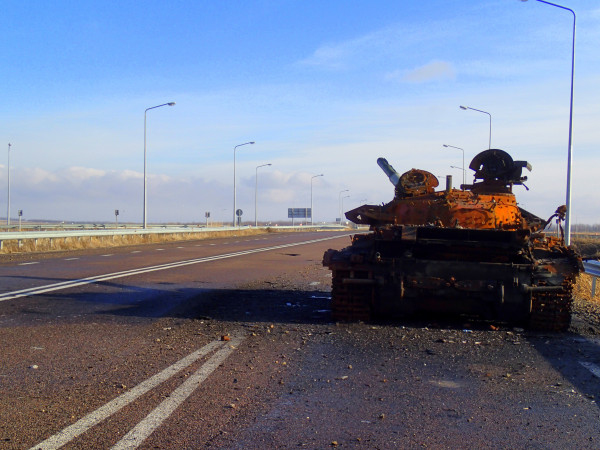 Everyone whom we meet is almost on the brink. It seems that, after all this time, people would get used to it and become hardened. Not true. Everything is rubbed raw and on the surface. People literally without skin. Just ask them.
The sun is shining, there is no snow. People carrying packages are walking past burned out tanks and bombed out shops. Life goes on, such a simple and ordinary life. They walk laughing, chatting, chewing sunflower seeds.
I ask everyone–why, why don’t you leave? And they all reply–where? Who needs us? My home is here…
So they remain, and they make pancakes under the shells.
Many left during the summer but the majority already return. There is no money, no work, nobody is expecting them.
–I put my ill mother on my back, and to the cellar. I won’t abandon her here, and where would we go? They’ll shoot a little, then again in the evening. It’s hard. But it’s nothing. We’re still alive. 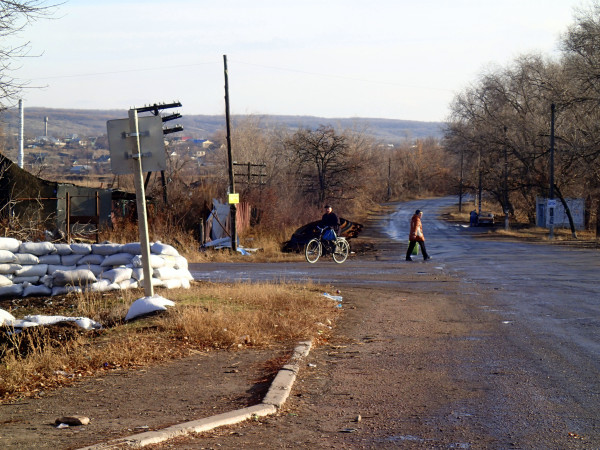 We drive further.
–Want to see our airport?
–Yes.
We approach the airport, and we see a column of bicyclists with children roll by. They went out on a trip on such a beautiful day. Life goes on… 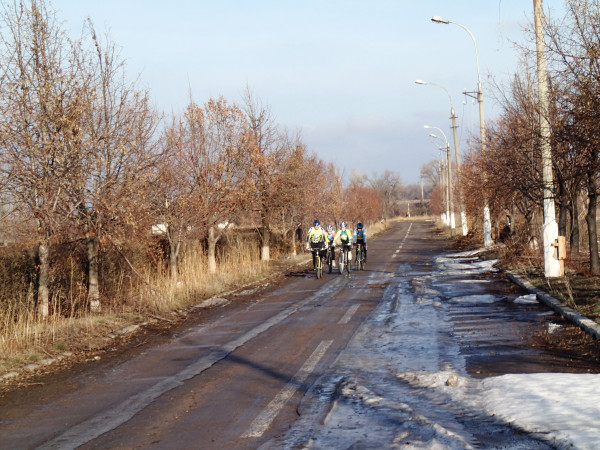 We approach what once was called the airport.
And it’s a cemetery now. Burned out BTRs, shell fragments, and tons of scrap metal…
–See what happened to it?
–Shells?
I point out tens of metal fragments which don’t look familiar to me at all. Lena, a beautiful blonde on high heels says knowingly:
–It was Grad.
The Lugansk airport. Or what it used to be. 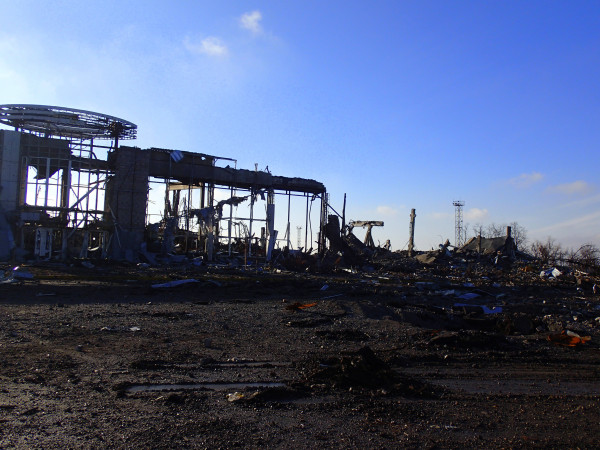 On our way back we gave a lift to a girl with a child. She’s a physician, left without a husband. From Novosvetlovka, but her house is gone. Now they live in Tarasovka at the in-laws.
–What’s your name?
–Dasha.
–How old are you?
–Today I am 6.
Just like my Fedorka.
–Today is your birthday?
–Uh-huh.
And a smile from ear to ear.
I’m trying to find something in my pocket to give as a present. I’m motioning to Sasha. But there’s nothing–we gave it all away.
–You know, we’ll soon have our Christmas Tree, and then Grandfather Frost will come!
Dasha smiles, and then they both leave.
And I don’t even turn away. I cry without a letup
To be continued…
Our brigade 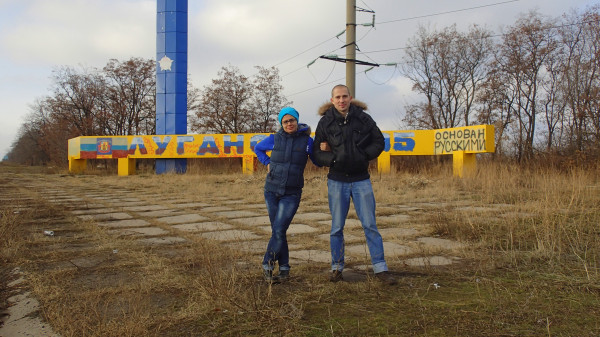 The Signs of Collapse

Nationalists in Sweden are Finally the Biggest Party

China Says US Is An EMPIRE OF HACKERS, Mocks…

Prev Next 1 of 4,953
Popular Topics
Advertisements