[To read Yevdokia Sheremetyeva other dispatches from the Donbass, click on the “littlehiroshima” tag above the title.]

–Ira, don’t cry! They aren’t shooting, it just seemed that way.
The kitchen is handing out food. People have come to the communal kitchen with glass jars.
I walk up to the women workers of the cafeteria, I’m giving them tampons. The second one, Ira’s friend, had tears running down her face.
–My darlings, thank you!
–It’s no big deal…When was the last bombardment?
–Yesterday, from grads.
–Isn’t there a ceasefire?
I grit my jaws. What if they start shelling again.
But they are laughing. And then more tears.
–Dear Lord, but they know they are shooting at us! What’s the matter–don’t they have mothers and children?
Tears in Pervomaysk are always just under the surface. It doesn’t take much. Almost everyone is in shock and pain. Pain which cannot be made to understand or felt by others. The city fell under siege on July 22. They’ve lived under constant, daily bombardments since then. Now there’s a ceasefire, but the inhabitants tell me they always hear salvoes, or at least small arms fire. Occasionally they drop bombs. They’ve been living in horror, fear, and death for half a year. 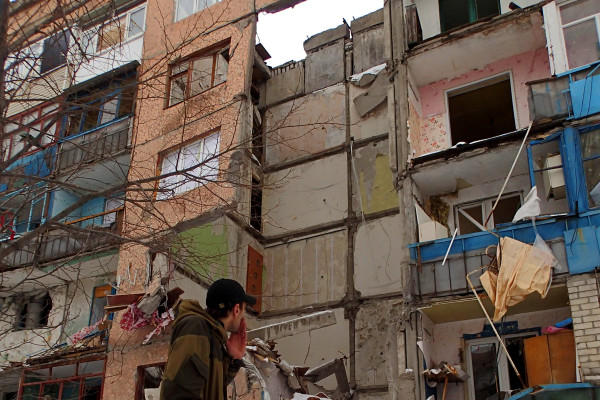 –In spite of the ceasefire, the grandkids sleep in their clothing. And with documents.
The girlfriend nods.
–You probably sleep fully dressed too, right?
The line consists mostly of retirees. They climb the stairs with difficulty and receive their share of food after showing proper documents. There’s suffering in their stare, gait, and words.
–Why don’t you leave, since it’s dangerous here?
–But where? Who needs us. Many left during the summer. Our home is here. Where are we to go?
During the summer only 5 thousand remained out of 60 thousand, now it’s back to 15 thousand. They returned to a city that is constantly shelled. –Thank God we are no longer starving. But it’s barely enough.
I’m holding the door, a granny is standing next to it.
–It’s you who brought the food?
–Yes, it’s us.
She tears up.
–My dear, thank you! There is God!
It’s the third communal kitchen already. Everyone cries in all of them. Then they kiss me on the cheeks and cry again. And thank you, thank you, thank you. My heart is turning inside out. My entrails have been torn out with hooks, and only endless emptiness remains inside me. 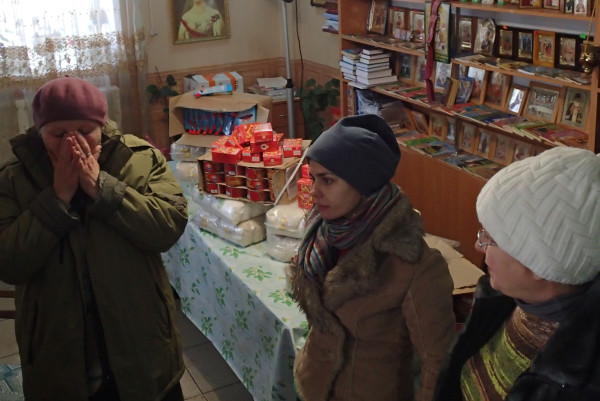 You can’t get to Pervomaysk. The city is in a horseshoe, surrounded by the UAF and National Guard from all sides. We had to pass through more than one checkpoint on the way from Lugansk. If you aren’t an inhabitant of the city, you can’t get in. Roads are closed off. Our humanitarian cargo was met by Rostislav, a handsome tall militiaman.
–It’s not a pseudonym. My name is Rostislav. Rostik. I was born here and I grew up here. I have nothing to fear. I’ve put up my address on the social media, I tell them–come here, and we’ll chat.
Rostislav puts us in his car. I look below–there’s a grenade wrapped in an iPhone cord, as if in an infant’s umbilical cord. –Is it real?
He laughs.
–Take it. Then look behind us.
I take it in my hands, which can’t stop shaking. I see something very big behind us. Rather bigger than a Kalashnikov, I’m curious what that is.
–Dear God, what is that?
My friend who accompanies the humanitarian cargo, Ruben, replies:
–It’s a Fly [RPG-18].
–Not, it’s RPG-26. Let’s go, I’ll show you what they did to our city. Rostislav slowly smokes one cigarette after another. He’s younger than me, but I feel like a child next to him–he has a precise and clear gaze.
I look out the window, trying to find at least one undamaged house. With at least intact windows. But I can’t find one.
–They’ve fixed that one up already. See the roof? They installed it a few days ago. And here? They already have plastic over the windows. They’ve done a lot. But you can see for yourself what’s happening here…See that crater? A family came out to cook at a fire outdoors…And see that house? A guy didn’t even have time to jump into the cellar–the door remained open. Body pieces everywhere. A direct hit.
A few minutes later my hand is too tired to take photos and open the windows. No strength to come out. Only powerlessness and helplessness remain. Dead powerlessness. No matter how many times you see the countless photographs after the bombardments, it doesn’t help comprehend what you see with your own eyes.
There is no vaccine that would allow you look on it calmly. 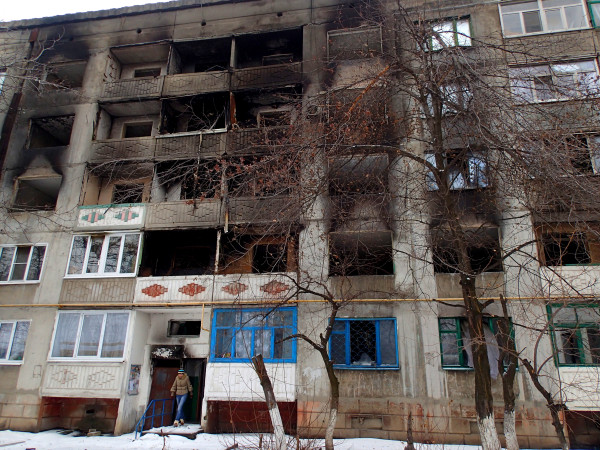 –But it wasn’t on purpose?
–Of course not on purpose. The shelling is not very accurate.
–Do they have spotters?
–They used to, but not anymore. 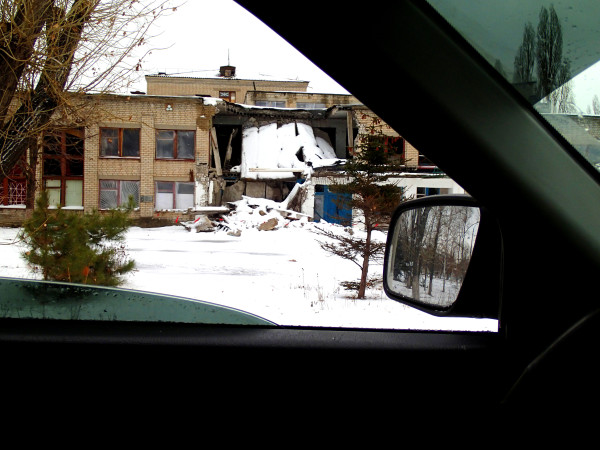 –Whom are they trying to hit? The militia?
–You know, we hunted them. There are some decent guys among them. When they saw they aren’t fighting against the Russian Army, but are firing on the elderly and the children, many tried to desert. They’ve been zombified into thinking they are liberating people from Putin. But other than that, they are pounding the entire city, indiscriminately. Schools, technical academies, the sports complex–everything. The city is like a sieve… Rostik draws on his cigarette, his eyes narrow.
–Let’s go into this stairwell.
We slowly walk up the stairs.
–Dear Lord, what happened here?
–Here all the kids can tell what’s incoming by the sound–howitzers, grads, mortars. But this one was from the air, from an aircraft… 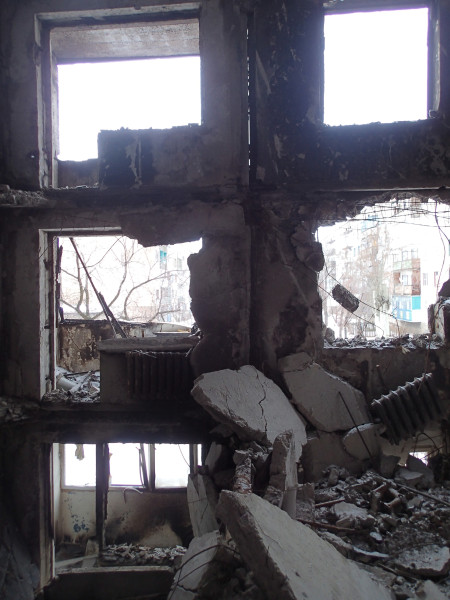 –What is this? Bombing the elderly, the kids–for what?
–They are all brainwashed. But some are decent. They can’t disobey their orders, but understand that every shell can take someone’s life, or destroy’s someone home forever.
–Maybe it’s better to leave the city, so that the people may live? Is it worth hundreds of lives?
Rostislav looks at me, piercing me to the bone:
–They’d either kill or put in jail half the people here. We’re all “terrorists” here, don’t you know. We won’t give up the people to them.
Recently, after the ceasefire started, the people of Pervomaysk began collecting unexploded shells in the city center. Right at the Lenin Monument.
Next to it there’s a trampled Ukrainian flag, all covered in snow and mud. People constantly come up and stand there a long time. Then they walk away in silence. Cemetery.
–We’re making a memorial out of this. So that everyone knows.
A week ago people were too afraid to even come out in the street.
–We were distributing bread, we drive up and call. And people are yelling to us from the cellar–“throw it down here.” They were afraid to come out. Sometimes during lulls in shelling some whose housing was intact would run home to wash up, get some things. That’s how many died… Everyone was sitting in the cellars and bomb shelters.
He points his finger at the shells.
–That’s a mortar shell, that’s a grad, those are fragmentation rounds. And that’s from the air…
A pile of rusted tubes. As if someone cut up tens of water pipes, if you don’t look too closely. Everyone of them is either someone’s death or someone’s pain. Now there are people in the streets. But the city feels depopulated. It’s as if you came to the Pripyat after the Chernobyl.
Rostik drives us around, but I can’t see anything anymore. It’s like there’s film over my eyes.  There are no people. No houses. Scarred children’s playgrounds. Death.
Many houses have writing on them–“PEOPLE.”
–Rostik, what’s that?
–People wrote that, but it hardly helps…
People wrote that, but for whom? Other people? 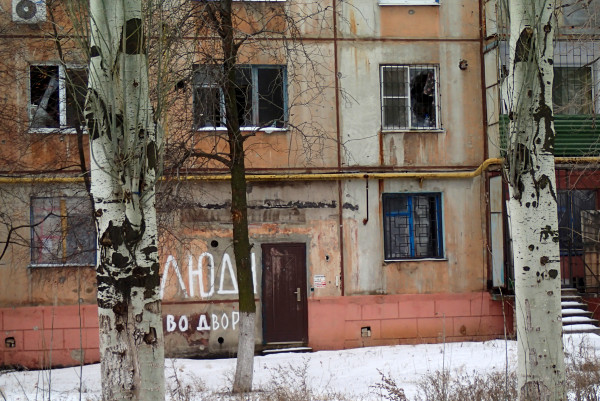 A cry from the heart, written in blood. On almost on every house.
A cry written with tears and sorrow. We are PEOPLE. Don’t kill! PEOPLE.
These words will stay with me forever. Like they were burned in with acid. They stand right before my eyes.
–Let’s go to the bomb shelter. I’ll show where those who have lost everything are hiding. We descent into the basement. Blankets hang everywhere. There’s a pot-bellied stove in the center. Mattresses, blankets, bags with clothing, water jugs. People began to stir. They saw a militiaman, they instantly surrounded him and barraged with questions. We were joined by Sanya, Rostik’s friend. Pseudonym Skorost’ [Speed]. Sanya is holding defensive positions, encircled by women.
–Are there many people living here?
A woman looks through me.
–When there’s a bombardment, it’s full. We live here now.
I see a separate compartment, all hung in rags. I pushed them aside, and see a granny looking at me with fright. Then she sees that we brought food, and her eyes are instantly moist. 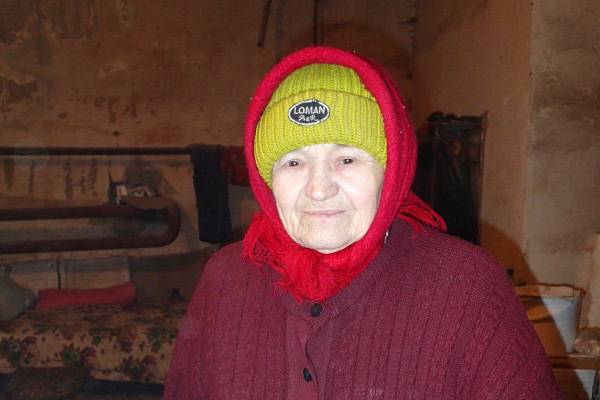 –Are you here alone?
–The children left, and the house was destroyed by two shells. So I live here.
–Why won’t they take you along?
–I don’t know. But I wouldn’t go. This is my home, I’ll die here.
And tears, tears, tears. Unbearable pain. They live in communes in these cellars. They feed themselves and do everything together.
My eyes are swollen. Rostik looks at me.
–You haven’t gotten used to it yet. No big deal. Let’s go on.
A chaotic conversation, thousands of questions–what, who, why. And all I can see is that granny and “PEOPLE”.
–At first the people behaved terribly. They took away each other’s rations, made scenes. It was everyone for himself. Now everything has changed. The war has awakened their humanity. Now when we distribute food they summon one another. And share everything.
Is it really necessary to spend half a year under shellfire to become Human? There’s a young kid at the checkpoint guarding the city’s exit. No older than 18. We give him candy, and he smiles from ear to ear.
–Do they have a Christmas tree in your city?
–Yes, they do.
–We do too! It’s New Year’s after all!
There were a few of us, those who brought humanitarian aid to Pervomaysk from Moscow. We collected these items from friends, acquaintances, through the Internet. We are of very different political views. But there isn’t a single one of us who didn’t cry on the way back. Choking, turning away, swallowing tears in most complete helplessness before that horror.And, as always–
If you want contribute to humanitarian aid, contact me through my livejournal account, through Facebook, or via email: [email protected] Everything will be delivered and reported.

Ukraine’s Eurointegration Strategy: “Give me money or I’ll shoot myself”

OFFICIAL: Production of Drugs in Afghanistan 35-Folded After US Invasion

Why the Coming Economic Collapse Will NOT be Caused by…

Prev Next 1 of 4,960
Popular Topics
Advertisements