[To view Yevdokia Sheremetyeva’s other dispatches from the Donbass, click on the “littlehiroshima” tab above the title.]

I sat and thought for a long time–what should I write in the report on the money that I managed to collect, and on what happened with the aid delivered to Pervomaysk last weekend?

Honestly, when I wrote that we’ll do it all ourselves, I sat confused. Because I had no idea what to do. What shall we bring? How? Who will drive it? What exactly are we supposed to do? And how?
Ringing silence. My hands were dropping. Why did I make that decision?
Then suddenly Sasha writes:
–Dunya, I’m renting a van, let’s go make a delivery.
He made it look so simple, no questions, no terrors. We have never met in person. Only in the ‘net. He simply offered:
–Shall we?
–Let’s!
And then it was a matter of little importance how much and of what we’ll collect. Even if it was only the stuff we ourselves would purchase and deliver. Even if we help only three people, that too will be the right thing to do.
And then Lyosha showed up–Dunya, shouldn’t we coordinate? I have friends who will help.
Then my own friends started to write and everything took off. By the time it was only two days until departure I was bombarded by letters from people who don’t know me at all. I was offered help, given the necessary phone numbers, referred to people, transferred money or delivered it in person. They would bring bags of canned meat and macaroni at night. They would catch me in daytime on the metro to bring packets of baby food and diapers.
My mom accepted the deliveries, and our apartment turned into a warehouse: 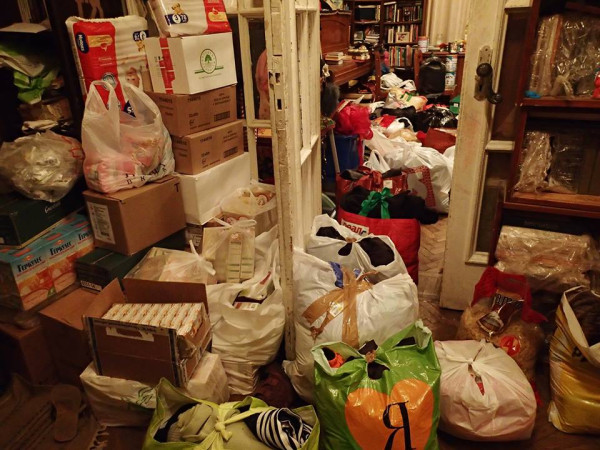 We collected about 100 thousand rubles in five days.
We used that money to buy food and hygiene products. Spent some of the money on gas. I can’t find the receipt for that. But believe me, Sasha spent much more of his money for gas and the van rental. 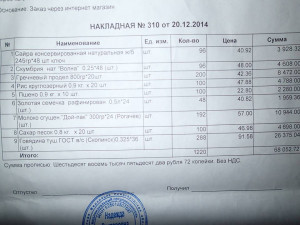 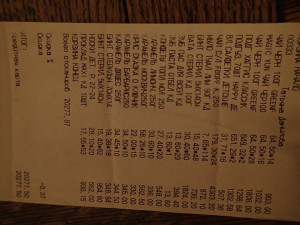 I received transfers from France and Italy. From Mariupol and Rostov. Even a few transfers from Kiev, which were particularly valuable to me.
–Dunya, we have different opinions, but the cause is right–people must be helped.
Sveta, my friend, drove with me to Auchan, packed boxes with bandages and gauze, got up at 6am to help me load the van. 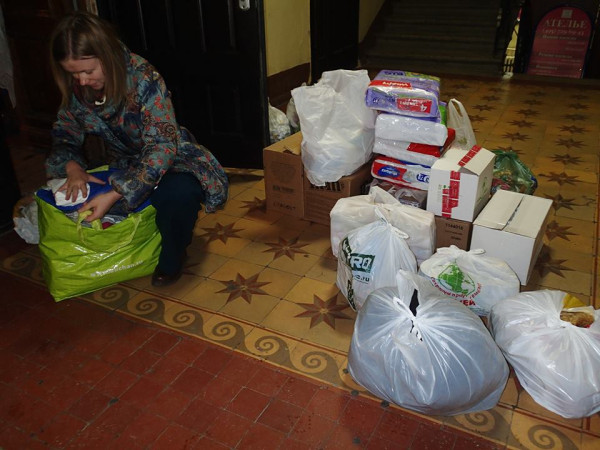 Sasha stoically drove from Moscow to Lugansk and back, all by himself. Naturally to the accompaniment of my constant chatter, but still…
Sasha, Sasha. When I cried in the van after we gave a lift to a 6-year-old girl with her mom who were left homeless, he comforted me. And then he simply said:
–We’ll have to go again. 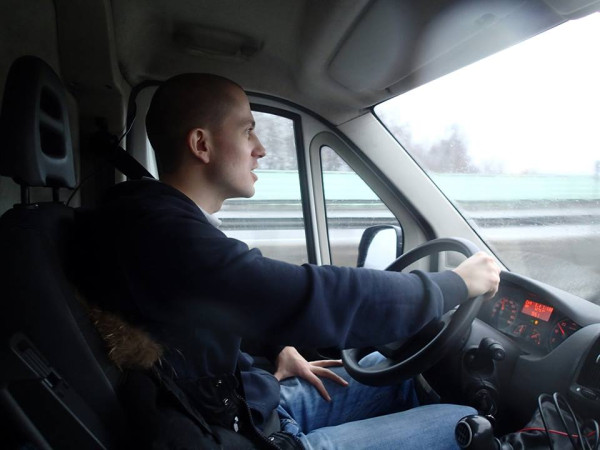 And then there were the people who brought food, made phone calls, wrote letters.
Guys! Thank you!
But most importantly: Zhenya and Lena. These two met me at night on the border. Took me everywhere–the airport, the bombed-out villages. We dropped off everything and drove off in the direction of Moscow, and the hardest task fell to them.
I bow before you. All the way to the ground. 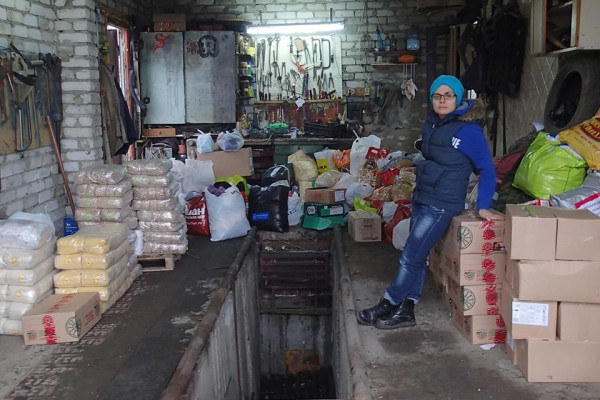 They went to the front lines. To Pervomaysk, which hasn’t received aid in almost half a year.
To a city which is constantly under fire even during the ceasefire. Before the ceasefire it was under a continuous heavy artillery bombardment. People didn’t even leave their cellars. 70% of buildings were ruined.
I regret I wasn’t there with them. 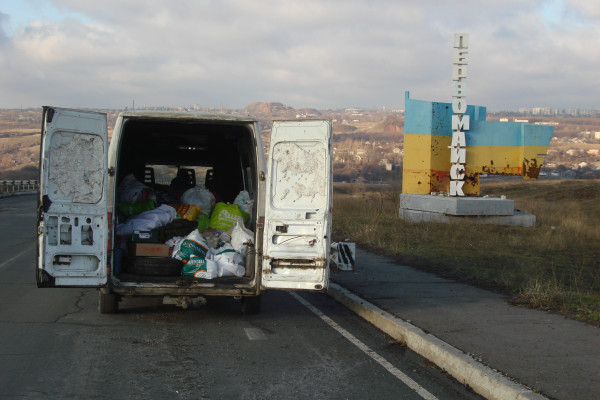 The distribution problem appeared immediately–if we deliver to specific families, then many won’t get anything. Therefore we decided to distribute food among communal cafeterias, which are free of charge.
The girls in the photos aren’t kids but fully capable cooks and  dishwashers. They work as well as the adults.
Zhenya wrote me in the evening: “Can you imagine, when we started unloading, the cream of wheat went first. And when they saw the oil, not to mention the condensed milk or canned meat, they were in shock.” 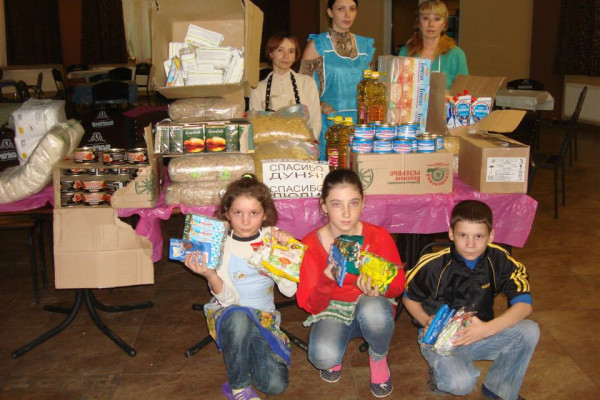 “It’s HAPPINESS in their eyes. And you understand, the are GLAD the someone is delivering aid. And when they discovered it’s from people and not from an organization, they were in tears.”
Can you understand?
With tears in their eyes (video from the 1:01 mark)
Just don’t you cry! 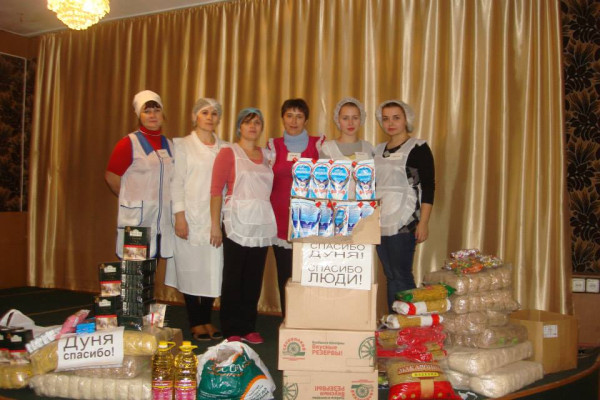 Since in addition to food we also brought a lot of stuff for kids, the guys delivered that to specific individuals.
Honestly, the “Thank you Dunya” sign makes me feel sad and uncomfortable.
But Zhenya and Lena decided that’s the best way to make it clear that the goods went where they were supposed to.
These are children who live in a cellar (the last photo of the post) which is now occupied by 30 people. 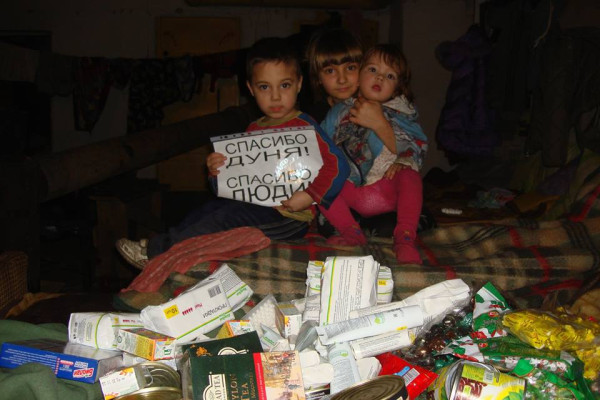 All the children’s products were delivered directly to moms! 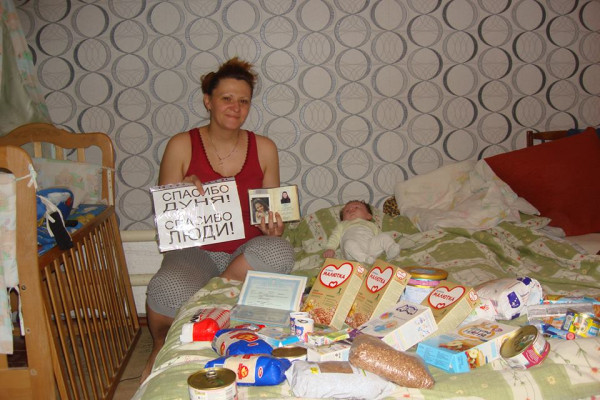 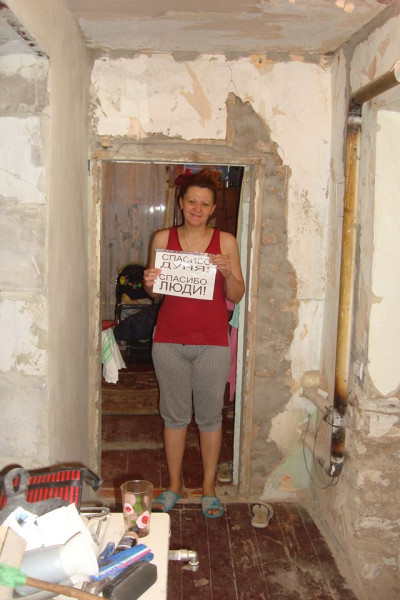 That’s how many live in Pervomaysk–in cellars, in groups. 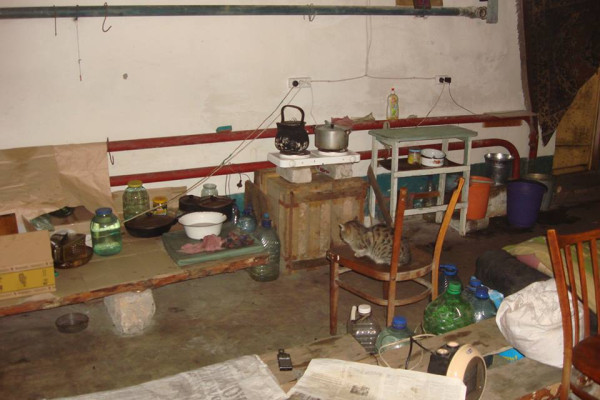 Zhenya took many photos.
But what I really want to say is that people are continuing to write us with offers of help.
And we’re going again next weekend! We have a full van of food, children’s products, and other stuff.
And there probably will be even more!
It’s some kind of a crazy miracle. Thank you everyone who trusted me.
Thank you everyone who sent money, who brought food and other items. Who wrote to give moral support. Sasha, Sveta, Lyosha, Zhenya, Lena–the realization that such people as you exist helps me think everything will turn out fine! 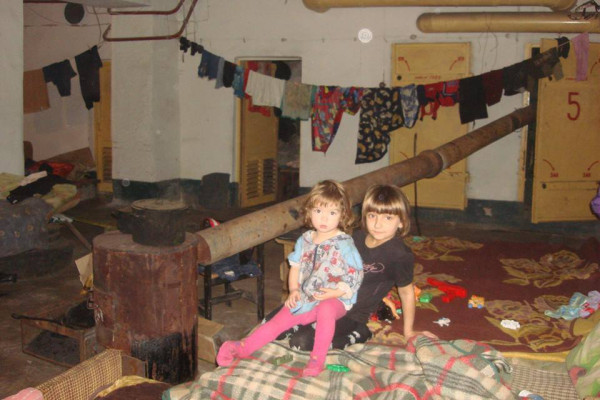 Best of Fort RussBloggersHumanitarian CrisisJ.HawklittlehiroshimaNovorossiaTerror
0 57
Share
Subscribe to our newsletter
Sign up here to get the latest news, updates and special offers delivered directly to your inbox.

How long until D-Day?

BREAKING: Residential Buildings On Fire In Donetsk, Firefighters Cannot Act Due To…

MAJOR: How a Russian Radar Managed to Detect six F-35…

Prev Next 1 of 4,912
Popular Topics
Advertisements